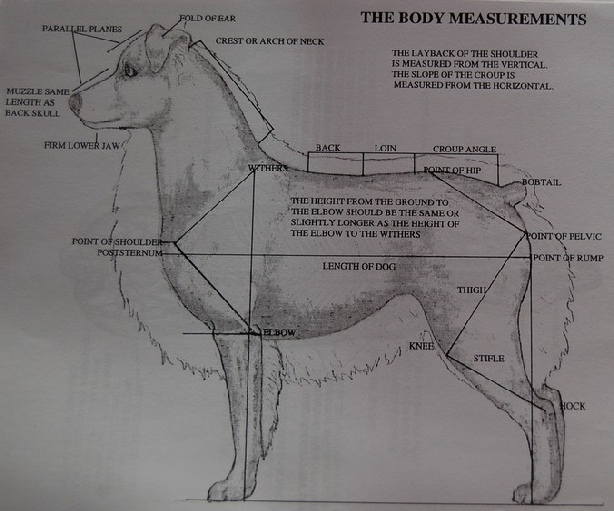 GENERAL APPEARANCE: The Australian Shepherd is well balanced, slightly longer than tall, of medium size and bone, with colouring that offers variety and individuality. He is attentive and animated, lithe and agile, solid and muscular without cloddiness. He has a coat of moderate length and coarseness. He has a docked or natural tail.

IMPORTANT PROPORTIONS: Measuring from the breastbone to rear of thigh and from top of the withers to the ground  the Australian Shepherd is slightly longer than tall. Solidly built with moderate bone. Structure in the male reflects masculinity without coarseness. Bitches appear feminine without
being slight of bone.

BEHAVIOUR/TEMPERAMENT: The Australian Shepherd is an intelligent working dog of strong herding and guarding instincts. He is a loyal companion and has the stamina to work all day. With an even disposition, he is good natured, seldom quarrelsome. He may be somewhat reserved in initial meetings.

HEAD: The head is clean cut, strong and dry. Overall size should be in proportion to the body.

FACIAL REGION:
Nose: Blue merles and blacks have black pigmentation on the nose (and lips). Red merles and reds have liver (brown) pigmentation on the nose (and lips). On the merles it is permissible to have small pink spots; however, they should not exceed 25 % of the nose on dogs over one year of age, which is a serious fault.
Muzzle: Equal in length or slightly shorter than the back skull.
Viewed from the side the topline of the back skull and muzzle form parallel planes, divided by a moderate, well-defined stop. The muzzle tapers little from base to nose and is rounded at the tip.
Jaws/Teeth: A full complement of strong white teeth should meet in a scissors bite or may meet in a pincer bite.

EYES: Brown, blue, amber or any variation or combination thereof, including flecks and marbling. Almond shaped, not protruding nor sunken. The blue merles and blacks have black pigmentation on eye rims. The red merles and reds have liver (brown) pigmentation on eye rims. Expression: Showing attentiveness and intelligence, alert and eager. Gaze should be keen but friendly.

EARS: Triangular, of moderate size and leather, set high on the head. At full attention they break forward and over, or to the side as a rose ear.

NECK: Strong, of moderate length, slightly arched at the crest, fitting well into the shoulders.

BODY: Top line: Back straight and strong, level and firm from withers to hip joints.
Croup: Moderately sloping.
Chest: Not broad, but deep with the lowest point reaching the elbow.
Ribs: Well sprung and long, neither barrel chested nor slab-sided.
Underline and belly: Shows a moderate tuck-up.

LIMBS
FOREQUARTERS:
Shoulder: Shoulder-blades long, flat, fairly close set at the withers and well laid back. The upper arm, which should be relatively the same length as the shoulder-blade, attaches at an approximate right angle to the shoulder line with forelegs dropping straight, perpendicular to the ground.
Legs: Straight and strong. Bone strong, oval rather than round.

HINDQUARTERS:
General appearance: The width of the hindquarters is equal to the width of the forequarters at the shoulders.
The angulation of the pelvis and upper thigh corresponds to the angulation of the shoulder-blade and upper arm, forming an approximate right angle
Stifle: Clearly defined.
Hock joints: Moderately bent.
Hocks: Short, perpendicular to the ground and parallel to each other when viewed from the rear. No rear dewclaws.
Hind feet: Oval, compact with close-knit, well-arched toes. Pads thick and resilient.

GAIT: The Australian Shepherd has a smooth, free and easy gait. He exhibits great agility of movement with a well-balanced, ground covering stride. Fore-and hind legs move straight and parallel with the centre line of the body. As speed increases, the feet (front and rear) converge toward the centre line of gravity of the dog while the back remains firm and level. The Australian Shepherd must be agile and able to change direction or alter gait instantly.

COAT:
Hair: Of medium texture, straight to wavy, weather resistant and of medium length. The undercoat varies in quantity with variations in climate. Hair is short and smooth on the head, ears, front of forelegs and below the hocks. Backs of forelegs and breeches are moderately feathered. There is a moderate mane and frill, more pronounced in dogs than in bitches.
Colour: Blue merle, black, red merle, red – all with or without white markings and/or tan markings, with no order of preference.The hairline of a white collar does not exceed the point of the withers at the skin. White is acceptable on the neck (either in part or as a full collar), chest, legs, muzzle underparts, blaze on head and white extension from underpart up to four inches (10 cm), measuring from a horizontal line at the elbow. White on the head should not predominate, and the eyes must be fully surrounded by colour and pigment. Merles characteristically become darker with increasing age.

FAULTS: Any departure from the foregoing points should be considered a fault and the seriousness with which the fault should be regarded should be in exact proportion to its degree and its effect upon the health and welfare of the dog.

DISQUALIFYING FAULTS:
• Aggressive or overly shy
• Any dog clearly showing physical of behavioural abnormalities.
• Undershot. Overshot by more than 1/8 inch. Loss of contact caused by short center incisors in an otherwise correct bite shall not be judged undershot. Teeth broken or missing by accident shall not be penalized.
• White body splashes in all colours, which means white on body between withers and tail, on sides between elbows and back of hindquarters